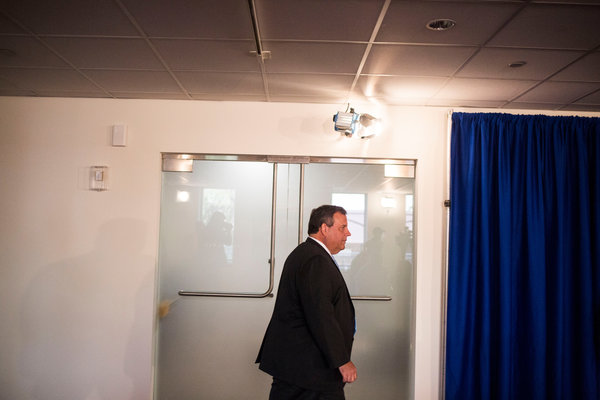 The political standoff that shut down New Jersey state beaches and parks over the weekend began in February with a signature laugh line delivered by Gov. Chris Christie.

Mr. Christie said during his budget address that he thought Horizon Blue Cross Blue Shield, the state’s largest health insurer, would turn over to the state millions of dollars a year, initially to finance his favorite social cause, battling opioid addiction. The lawmakers chuckled at the thought.

“Why wouldn’t they?” Mr. Christie responded in mock disbelief. “You laugh — so cynical.”

It was vintage Chris Christie, a thinly veiled threat to get his way, this time by putting forward a questionable plan that would seem to be anathema to his fellow Republicans. It was an approach that had worked many times — to cow the teachers’ union or opponents of his court nominees.

Now, with Mr. Christie’s punches weakened by scandal and support among voters sagging, the State Assembly is refusing to go along. Lawmakers rejected his effort to link passage of the state budget to his plan to force Horizon to hand over $300 million of its roughly $2.4 billion reserve.

The resulting shutdown will enter its third day on Monday.

The statehouse was mostly empty on Sunday, and Mr. Christie said he expected the government to remain closed at least through Monday. He sent a letter to lawmakers on Sunday demanding special legislative sessions on Monday morning. Also on Monday, Robert A. Marino, the chief executive of Horizon, was scheduled to meet with state officials in Trenton.

It may prove to be the final battle for a governor who for a time seemed to redefine what it meant to be brash in modern politics, at least until President Trump’s emergence as a political figure. It was a style that Mr. Christie thought would punch his ticket to the White House, but with his presidential dreams dashed, he appears nonetheless determined to end his last fight with a win.

New Jersey is one of at least nine states that failed to meet their July 1 budget deadline. That had an immediate effect on residents of three of the states — Illinois, Maine and New Jersey.

The other six states — Connecticut, Delaware, Massachusetts, Oregon, Rhode Island and Wisconsin — either have laws that maintain current spending levels or provide for stopgap measures in case of a budget impasse.

Officials said states without budgets would feel the full effects on Wednesday, after the Fourth of July holiday, when courts, motor-vehicle agencies and other state offices are to resume normal business. Monday is not a holiday, but because it falls between the weekend and the holiday, state officials expected less activity than usual.

In New Jersey, Mr. Christie’s longtime Democratic ally, Stephen M. Sweeney, the State Senate president, pushed through a bill on Thursday that would give state officials substantial authority to strip Horizon of reserves they deemed excessive. Mr. Christie had made clear that if the Horizon bill were not passed, he would use his line-item veto to strike Democratic spending priorities from the budget, including school funding and social welfare programs, in effect rendering the budget useless.

New Jersey’s Constitution requires the government to cease spending on everything except public safety and emergency services if a budget is not signed by July 1, and so state parks closed on Saturday, and government offices were not expected to open on Monday. Thousands of workers have been furloughed, and Mr. Christie said they should not expect to receive back pay when a budget is ultimately approved.

After months of attacking Horizon and its leaders, Mr. Christie blamed the leader of the State Assembly, Vincent Prieto, a Democrat, for the shutdown. The governor’s office adorned buildings around the state with posters showing Mr. Prieto and a caption that said, “This Facility Is CLOSED Because of This Man.”

At a news conference on Sunday, Mr. Christie said Mr. Prieto’s suggestion that the Horizon bill should be considered after the passage of a budget was “a fake, phony offer.”

“I haven’t heard from Vinnie Prieto since Friday when he walked out of my office,” the governor said. “He’s the one who dug his heels in and drew a line in the sand.”

Mr. Christie made clear during his news conference that he was not concerned with what anyone thought about the fact that he had enjoyed the holiday weekend at a governor’s residence in Island Beach State Park, a popular beach that was closed to his constituents as a result of the broader shutdown.

On Sunday, The Star-Ledger of New Jersey posted aerial photographs of Mr. Christie and his family sunning on the closed beach. Social media users expressed outrage. Beaches not run by the state were packed beyond capacity.

The paper said that when Christie was asked whether his use of the beach was fair, he replied, “Run for governor, and you can have a residence there.”

New Jersey’s government does not have a unique hold over Horizon. Mr. Christie has mentioned Horizon’s “charitable mission” and its nonprofit status, but the company is not a charity and does, in fact, pay taxes. It does not pay dividends; surpluses remain with the company.

The bill passed by the State Senate would make several changes to state law on the operation of health service corporations. (Horizon is the only such entity operating in New Jersey.) The bill would require Horizon to become an insurer of last resort, paying for the medical care of the state’s sickest and poorest residents. Horizon said that would mean that its customers would be forced to shoulder a burden that should be the government’s responsibility.

“We feel sorry for Governor Christie,” Kevin McArdle, Horizon’s public affairs manager, said in a statement. “In the twilight of his failed tenure, Governor Christie is resorting again to bullying and distortions to retaliate against Horizon’s 3.8 million policyholders for opposing his $300 million reserve raid that has been called a shakedown and extortion.”

After his budget address in February, Mr. Christie escalated his public attacks on Horizon. Last month, he held an unusual news conference in which he announced that the state had levied fines of $15.5 million against the insurer for incorrectly processing Medicaid claims. Horizon said it would challenge the findings.

In 2005, New Jersey Democrats toyed with raiding Horizon’s reserves but abandoned the move after the state treasurer said such a move would not withstand legal scrutiny. Horizon has not said whether it would challenge the current bill in court.

Horizon has said its reserves are within industry norms and are only enough to cover 75 days’ worth of claims for its members.

Mr. Christie’s effort to take some of the company’s reserves has been met with stark opposition, most vocally by conservative advocates of free-market principles and minimal government.

An editorial in The Wall Street Journal called it “a tax and regulatory mugging masked as public charity.” Steve Forbes, the onetime presidential candidate, said it amounted to a “permanent backdoor tax increase” that “set a dangerous precedent for state government intrusion into the private marketplace.”

In Trenton on Sunday, Shawn Ludwig, the president of Communications Workers of America Local 1038, which represents about 3,000 state workers, called the Horizon situation a “made-up crisis.”