Skip to content
White House press secretary Sarah Sanders offered a very short answer when asked if the White House thought the women were liars.
“We’ve been clear on that in the beginning, and the President’s spoken on that,” she said.
The question came amid revelations in the media and entertainment industries and the realm of politics of stories of women coming forward to share encounters of sexual harassment and assault in the workplace.
On the campaign trail, then-candidate Trump dismissed the accusations from the more than a dozen women. 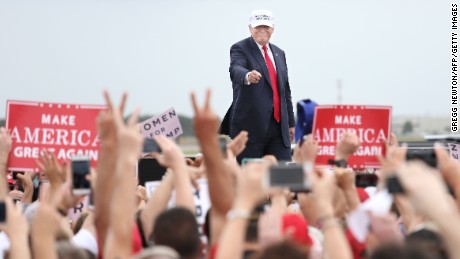 “As you have seen, I am a victim of one of the great political smear campaigns in the history of our country,” he said at a rally last October in Charlotte, North Carolina. “They are coming after me to try and destroy what is considered by even them the greatest movement in the history of our country.”
The President flat-out called it a lie, during that rally last year: “It’s one big ugly lie. It’s one big fix. The press can’t write the kind of things they write, which are lies, lies, lies.”
Friday’s press briefing question also comes amid a legal case against Trump brought by Summer Zervos, a former contestant on NBC’s “The Apprentice,” who accused Trump of sexually assaulting her in 2007. The accusations were made in October of last year at a news conference.
Zervos’ lawyers subpoenaed his campaign for all documents relating to her, all communications with or about her and “all documents concerning any woman who asserted that Donald J. Trump touched her inappropriately.”
Asked about the subpoena at a White House news conference last week, Trump said, “All I can say is it’s totally fake news, just fake. It’s fake. It’s made-up stuff, and it’s disgraceful what happens, but that happens in the world of politics.”