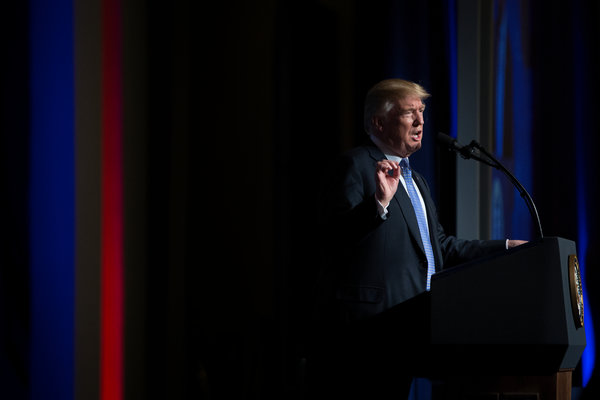 WASHINGTON — President Trump’s condolence call to the widow of a slain soldier exploded into a vicious row that swamped the White House on Wednesday, with the soldier’s grieving mother accusing the president of disrespecting her family and a defiant Mr. Trump complaining that his words had been cynically twisted for political purposes.

The back-and-forth made a furious spectacle of what is, at the best of times, one of the most emotionally wrenching contacts between the commander in chief and a bereaved citizen. It overshadowed any talk of Mr. Trump’s legislative priorities and instead recalled his history of feuding with military families or even, as in the case of Senator John McCain, a war hero.

Twelve days after four Americans were killed in an Oct. 4 ambush in Niger, the president called the widow of Sgt. La David T. Johnson, who was among the slain, and said that her husband “knew what he signed up for,” referring to the soldier only as “your guy,” according to Sergeant Johnson’s mother and a Democratic congresswoman, who both listened to the call.

Mr. Trump angrily disputed that account, insisting that he “had a very nice conversation with the woman, with the wife, who sounded like a lovely woman.” The White House accused the congresswoman, Frederica S. Wilson of Florida, of politicizing a sacred ritual after Mr. Trump initially said she “fabricated” it.

It was, to a great extent, a self-inflicted wound. Mr. Trump opened the issue on Monday when he deflected a question about why he had not spoken publicly about the deaths of the four soldiers by falsely accusing his predecessor, President Barack Obama, of not contacting the families of fallen troops.

On Tuesday, Mr. Trump dragged his chief of staff, John F. Kelly, into the dispute. He told reporters that Mr. Obama had not called Mr. Kelly, a former Marine Corps general, when his son Second Lt. Robert Kelly was killed in action in 2010 in Afghanistan. Mr. Kelly, who has long been reluctant to talk about the loss of his son, did not comment on the issue.

But the White House presented Mr. Kelly as a character witness on Wednesday, noting that he was present for Mr. Trump’s call on Tuesday afternoon to Sergeant Johnson’s wife, Myeshia Johnson, and viewed it as a respectful expression of presidential sympathies.

“He thought that the president did the best job he could under those circumstances to offer condolences on behalf of the country,” said Sarah Huckabee Sanders, the White House press secretary. She said that Mr. Kelly is “disgusted by the way this has been politicized, and that the focus has become on the process and not the fact that American lives were lost.”

It was Mr. Trump, however, who first put a spotlight on politics and process by comparing his practices with those of Mr. Obama and other presidents. Mr. Obama did, in fact, call or meet with the families of multiple fallen soldiers, though he sent letters to many others. Mr. Trump said he planned to call as many families of fallen soldiers as was “appropriate.”

His call to Ms. Johnson came as she and her two young children were in a limousine at Miami International Airport awaiting a plane carrying the remains of Sergeant Johnson. Mr. Trump spoke for three to five minutes, Ms. Wilson said.

Mr. Trump flatly dismissed Ms. Wilson’s account and suggested he would produce evidence to discredit it.

“Democrat Congresswoman totally fabricated what I said to the wife of a soldier who died in action (and I have proof). Sad!” he wrote in an early-morning Twitter post. He repeated his denial hours later, before a White House meeting with senators. “I didn’t say what that congresswoman said,” the president said. “Didn’t say it at all, she knows it.”

Ms. Wilson quickly fired back on Twitter. “I still stand by my account of the call b/t @realDonaldTrump and Myeshia Johnson. That is her name, Mr. Trump. Not ‘the woman’ or ‘the wife’” she wrote in a post.

Sergeant Johnson’s mother, Cowanda Jones-Johnson, backed the congresswoman’s version. “Yes, he did state that comment,” Ms. Jones-Johnson said, via message on Facebook, of Mr. Trump’s remark that her son “knew what he signed up for.”

By midafternoon, the White House was no longer disputing Ms. Wilson’s account of Mr. Trump’s choice of words. Ms. Sanders said the White House did not tape the call. But she said Ms. Wilson had willfully mischaracterized the spirit of the conversation.

“This is a president who loves our country very much, who has the greatest level of respect for men and women in uniform, and wanted to call and offer condolences to the family,” Ms. Sanders said. “To try to create something from that, that the congresswoman is doing, is frankly appalling and disgusting.”

The dispute over Mr. Trump’s condolence call topped several contentious issues that marked yet another rancorous day at the White House.

The president kept up his feud with the National Football League over players who take a knee in protest during the playing of the national anthem. And he revived his unproven charges that the former F.B.I. director, James B. Comey, had lied, leaked information and protected Hillary Clinton, Mr. Trump’s opponent in last year’s presidential election.

But the way Mr. Trump has handled grieving military families loomed over all, and thrust the sensitive issue of how presidents deal with the casualties of war to center stage. His reference to Mr. Obama’s lack of calls also drew furious responses from the former president’s aides and expressions of discomfort from former military commanders.

The feud with Sergeant Johnson’s family was reminiscent of a public fight Mr. Trump began with the parents of a Muslim American soldier, Humayun Khan, who was killed in 2004 in Iraq. The soldier’s parents, Khizr and Ghazala Khan, appeared at the Democratic National Convention in 2016, where Mr. Khan criticized Mr. Trump.

Mr. Trump’s charged relationship with Gold Star families — those who have lost relatives in war — took another turn with the White House’s disclosure on Wednesday that it had sent a check for $25,000 to the family of Sgt. Dillon Baldridge, who was shot to death by an Afghan police officer, along with two other American soldiers, in June.

Mr. Trump had promised the check to Sergeant Baldridge’s father, Chris, in a phone call a few weeks after his son’s death, according to The Washington Post. But the president did not send the money until the newspaper inquired about it on Wednesday.

“For somebody to tell me they were going to give me something and then not come through, it feels like kicking me when I’m down,” Mr. Baldridge said Wednesday.

Some experts sympathized with the challenge Mr. Trump faced in placing condolence calls.

“It’s always been difficult for presidents,” said Peter D. Feaver, an expert in civilian-military relations at Duke University, “but in some ways, it’s become more difficult as the number of casualties dwindled, so each one can be individualized to a much greater extent.”

Other calls Mr. Trump has made to families have been well received. The president called Eddie Lee, the father of First Lt. Weston C. Lee, who was killed in April by a roadside bomb in Iraq, and told him, “I bet he never gave you a minute’s trouble as a child.”

“The president was just so nice and caring, you could hear it in his voice, you could tell what a caring family man he is,” said Mr. Lee, who volunteered, “I voted for Trump and I’d vote for him again.”

But the president’s call to Sergeant Johnson’s widow illustrated the pitfalls to his improvisational approach, according to other experts. Kori Schake, a research fellow at the Hoover Institution of Stanford University who specializes in civilian-military relations, said the account of Mr. Trump’s call suggested he did not follow the “time-honored rituals” of such calls.

“My guess is that he thought he was showing respect for the toughness and patriotism of people who sacrifice for something bigger than themselves, and just did it clumsily,” Ms. Schake said.

An earlier version of this article referred imprecisely to Sgt. La David T. Johnson. He was serving in Africa with an Army Special Forces unit; he was not a Green Beret.