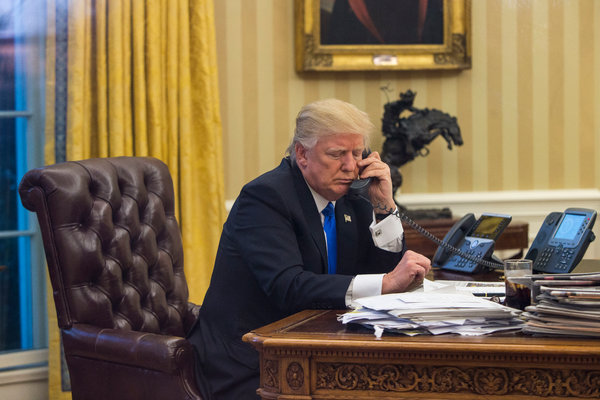 WASHINGTON — President Trump engaged in contentious telephone calls with the leaders of Mexico and Australia in his early days in office, pressing them to make concessions to satisfy his own domestic political needs in exchanges so sharp that he said talking to President Vladimir V. Putin of Russia was more pleasant.

Transcripts of his calls with President Enrique Peña Nieto of Mexico and Prime Minister Malcolm Turnbull of Australia confirm previous news reports of tension during the conversations in January, just a week after Mr. Trump’s inauguration, and show a new president eager to fulfill campaign promises while developing relationships with foreign counterparts.

The transcripts, assembled from the notes of aides listening to the calls, were obtained by The Washington Post, which posted them online on Thursday morning.

With Mr. Peña Nieto, Mr. Trump repeatedly threatened to impose a stiff border tax to keep out Mexican products and complained about “pretty tough hombres” who were bringing so many drugs over the border that they had even made New Hampshire “a drug-infested den.” The biggest point of contention came as the president insisted that the Mexican president stop saying publicly that he would not pay for the wall that Mr. Trump had promised to build on the border between the two countries.

“If you are going to say that Mexico is not going to pay for the wall, then I do not want to meet with you guys anymore because I cannot live with that,” Mr. Trump said.

The call with Mr. Turnbull was even more testy as the president complained about what he called “a disgusting deal” that Australia had sealed with President Barack Obama in which the United States agreed to consider accepting up to 1,250 economic refugees. Mr. Trump complained that he would look “so foolish” doing so after barring refugees from the rest of the world.

“I have had it,” Mr. Trump snapped toward the end of the call. “I have been making these calls all day, and this is the most unpleasant call all day. Putin was a pleasant call. This is ridiculous.”

Transcripts of a president’s conversations with foreign leaders are rarely made public, and the disclosure prompted another White House complaint about secrets slipping out.

“It’s a national security matter when phone call transcripts are being leaked out,” Lindsay Walters, the White House deputy press secretary, told reporters on Air Force One as Mr. Trump flew to an event in West Virginia. “It prevents the president from being able to do, you know, what he does best and negotiate with foreign leaders.”

But the full accounts of the conversations illustrated Mr. Trump’s approach with foreign leaders — flattering his counterpart one moment, badgering him the next, always conscious of how the policies being discussed connected to his campaign promises and how they would affect his domestic political standing.

Fresh from his inauguration, he had his campaign victory on his mind, boasting to Mr. Peña Nieto that “no one got people in the rallies as big as I did” and to Mr. Turnbull that “they said I had no way to get to 270” votes in the Electoral College “and I got 306.” He buttered up Mr. Peña Nieto, telling the interpreter on their call that “he speaks better English than me,” suggesting that the Mexican president would be so popular that the Mexican people will amend their constitution to allow him to run again and declaring that “it is you and I against the world, Enrique, do not forget.”

But there was an edge to both conversations as he sought to bring his campaign platform to fruition. The talk with Mr. Peña Nieto on Jan. 27 came after the Mexican leader canceled a meeting with Mr. Trump because of their dispute over who would pay for the proposed border wall. The two never resolved that on the call, with both men clearly worried about the political effect in their own countries.

“We find this completely unacceptable for Mexicans to pay for the wall that you are thinking of building,” Mr. Peña Nieto told Mr. Trump, explaining how precarious his position was at home. “I would also like to make you understand, President Trump, the lack of margin I have as president of Mexico to accept this situation.”

Mr. Trump too was conscious of his own position: “On the wall, you and I both have political problem. My people stand up and say, ‘Mexico will pay for the wall,’ and your people probably say something in a similar but slightly different language. But the fact is we are both in a little bit of a political bind because I have to have Mexico pay for the wall. I have to. I have been talking about it for a two-year period.”

Mr. Peña Nieto told Mr. Trump that he had put him in a bad position. “You have a very big mark on our back, Mr. President, regarding who pays for the wall,” he said. “This is what I suggest, Mr. President: Let us stop talking about the wall.”

He added that he understood that any country had the right to protect its border. “But my position has been and will continue to be very firm saying that Mexico cannot pay for that wall.”

Mr. Peña Nieto repeated that they should stop talking about the wall. “I understand the critical political position that this constitutes for your country and for you, Mr. President,” he said. “Let us look for a creative way to jump over this obstacle.”

Mr. Trump’s call with Mr. Turnbull the next day, Jan. 28, proved more combative. Mr. Trump said he had been told that he had to accept refugees held by Australia on the islands of Nauru or Manus for more than three years.

“Somebody told me yesterday that close to 2,000 people are coming who are really troublesome,” he complained to Mr. Turnbull. “And I am saying, boy that will make us look awfully bad. Here I am calling for a ban where I am not letting anybody in and we take 2,000 people. Really, it looks like 2,000 people that Australia does not want and I do not blame you, by the way, but the United States has become like a dumping ground.”

“Yes,” Mr. Turnbull said, “but let me describe what it is.” The United States had agreed only to consider accepting up to 1,250 refugees, but each of them would be subject to vetting and could be rejected. The people at issue were economic refugees, mainly from Iran, Pakistan and Afghanistan, he said, not criminals or terrorists.

“Why haven’t you let them out?” Mr. Trump demanded. “Why have you not let them into your society?”

“It is not because they are bad people,” Mr. Turnbull said. “It is because in order to stop people-smugglers, we have to deprive them of the product.” Australia by policy, he said, refuses to accept refugees who arrive by boat because it would encourage smugglers to keep charging desperate people to bring them there.

Mr. Turnbull implored the president to abide by the agreement. “I am asking you as a very good friend. This is a big deal. It is really, really important to us that we maintain it.”

“Malcolm, why is this so important?” Mr. Trump said. “I do not understand. This is going to kill me. I am the world’s greatest person that does not want to let people into the country.” Going along with the deal “puts me in a bad position.”

He added, “It makes me look so bad and I have only been here a week.”

Mr. Turnbull repeated that it was only 1,250 people, each of them subject to vetting.

“I will be honest with you, I hate taking these people,” Mr. Trump said. “I guarantee you they are bad. That is why they are in prison right now. They are not going to be wonderful people who go on to work for the local milk people.”

“I would not be so sure about that,” Mr. Turnbull said.

“Well, maybe you should let them out of prison. I am doing this because Obama made a bad deal.”

“But I can say to you, there is nothing more important in business or politics than a deal is a deal,” Mr. Turnbull said.

“This is a stupid deal,” Mr. Trump said. “This deal will make me look terrible.”

“Mr. President, I think this will make you look like a man who stands by the commitments of the United States.”

He said that he worried that the terrorists like those who killed Americans in Boston, San Bernardino and New York could be admitted to the country: “I am going to get killed on this thing.”

“You will not,” Mr. Turnbull insisted.

“Yes, I will be seen as a weak and ineffective leader in my first week by these people. This is a killer.”