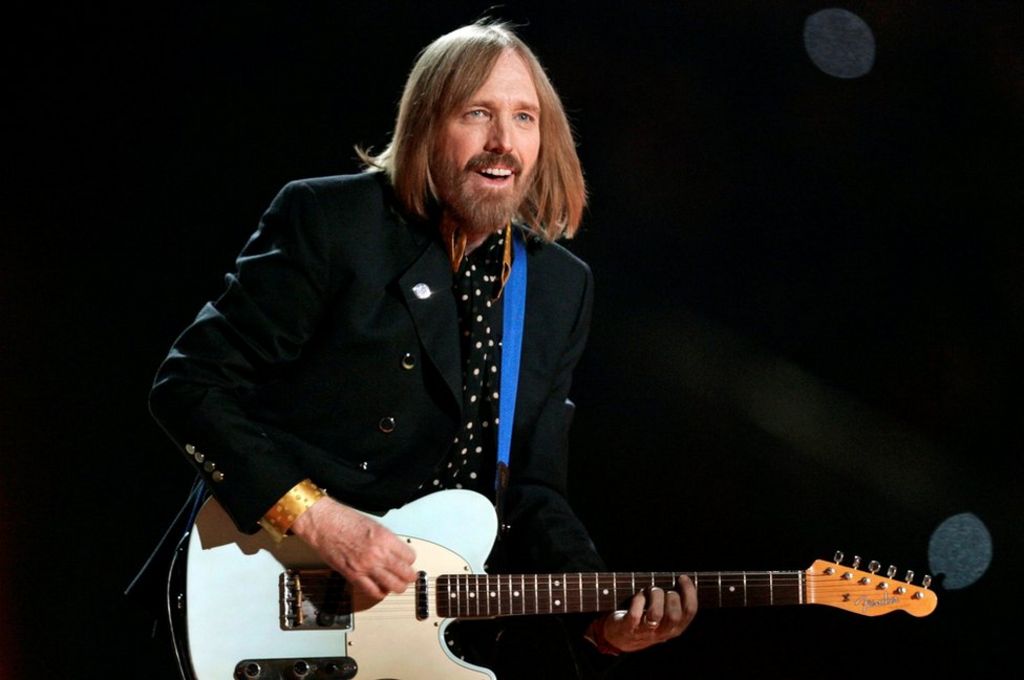 When Tom Petty and the Heartbreakers released their first album in 1976, few could have imagined they would become one of America’s biggest touring bands.

They were a scrappy, gritty garage band – initially lumped in with the punk and New Wave scenes.

But Petty, the son of a Florida insurance man, had an uncanny knack for melody that turned the band into one of the biggest acts of the 1980s.

Songs like Free Fallin’, Running Down A Dream and American Girl (the final track on that debut album) have become rock standards.

They’re so integral to the fabric of popular music that Sam Smith unintentionally lifted the melody for I Won’t Back Down on his breakthrough single, Stay With Me.

Ever the gentleman, Petty refused to take Smith to court, and declared he had “no hard feelings” towards the British star.

“All my years of songwriting have shown me these things can happen. Most times you catch it before it gets out the studio door but in this case it got by.”

He was eventually given a co-writing credit on the song.

According to legend, the singer devoted his life to music after shaking Elvis Presley’s hand in the 1950s. He traded his slingshot for a box of records and never looked back.

Aged 17, he dropped out of school to join Mudcrutch with future Heartbreakers Mike Campbell (guitar) and Benmont Tench (keyboards).

The band learned their craft by listening to pop radio, he once told NPR.

“We’d assign each person a verse. Sometimes you’d wait an hour for it to come on again so you could finish it off.”

In the early 1970s, they moved to Los Angeles in the hope of scoring a record contract. Petty succeeded, but the band fell apart soon after.

It wasn’t until 1975 that they reunited – after Petty heard a demo that Campbell and Tench were working on with Ron Blair and Stan Lynch.

The Heartbreakers were duly formed, and the quintet released their self-titled debut a year later.

It tanked in the US, but the band started to gain a reputation in the UK, where they were the support act for Nils Lofgren. Within a few months, the band was headlining its own tour, and the album entered the chart on both sides of the Atlantic.

But it was their third record, Damn the Torpedoes, that cemented the band’s reputation.

Featuring their first bona fide hit singles, Don’t Do Me Like That and Refugee, the record went triple platinum in the US. Rolling Stone magazine praised the record for capturing the “sound of a live band playing”, and neatly summarised Petty’s appeal.

“If Bruce Springsteen was tracking down the specifics of place and a particular class experience, making little movies in song, Petty was making music that, on the surface, seemed far less ambitious. But he created modest scenes that listeners could identify with in deep, lasting ways.”

That became his stock in trade – calmly searching lyrics that resonated with millions of Americans.

His craftsmanship won the admiration of former heroes like Bob Dylan, Roy Orbison, Jeff Lynne and George Harrison, with whom he formed The Traveling Wilburys at the end of the 80s.

“The great thing about the Wilburys was that none of us had to take the heat by ourselves,” he recalled. “I was just a member of the band. Nobody felt like he was above anybody else. We had such a good time.”

The project was a necessary antidote after a turbulent couple of years.

In 1986, right before he set off on a world tour with Bob Dylan, Petty’s house burned down in an arson attack. He managed to escape with his wife and children, but most of his belongings were destroyed.

“It’s very hard to even believe that someone wants to kill you,” he later recalled. “It’s a very hard thing to go through.

“The interesting thing is how many people called and confessed the next day.”

He accepted the experience could have inspired the lyrics to his next hit single, I Won’t Back Down.

“I felt really elated that they didn’t get me,” he told NPR. “I survived.”

That song came from his debut solo album, Full Moon Fever. Incredibly, it was initially rejected by his record company, MCA, who said they “didn’t hear a hit”.

“I was hurt so bad,” the singer said – but he put the album to one side and put his energies into The Traveling Wilburys. Six months later, he brought the album back to the label – unchanged – and they relented and released it.

Full Moon Fever went on to become the biggest-selling record of his career, certified five times platinum in the US (gold in the UK), thanks largely to the opening track, Free Fallin’.

Petty’s most enduring song, it was written and recorded in just two days. The lyrics tell the familiar story of boy who leaves his hometown to experience the thrill of the city, breaking the heart of his Elvis-loving “good girl” in the process.

It’s “a very good song,” Petty once said. “Maybe it would be one of my favourites if it hadn’t become this huge anthem.”

Petty followed up Full Moon Fever with another platinum-selling solo album, Wildflower. Like its predecessor, it featured most of the Heartbreakers in supporting roles, and they reconvened as a “proper” band in 1996, recording the soundtrack for Ed Burns’ film She’s the One.

Unbeknownst to the public, he was battling an addiction to heroin during this period – which also saw him divorce his wife of 22 years, Jane Benyo.

“Using heroin went against my grain,” he told biographer Warren Zane. “I didn’t want to be enslaved to anything. So I was always trying to figure out how to do less, and then that wouldn’t work. Tried to go cold turkey, and that wouldn’t work. It’s an ugly thing. Really ugly. I fear that if I talk about it, people will think, ‘Well, I could do it and get off.’ But you can’t. Very few people do.”

Once clean, his recording career picked up again – culminating in a high-profile Super Bowl Half-Time show in 2008. The Heartbreakers, meanwhile, became a festival staple, showing up the younger acts at Bonnaroo and the Isle of Wight with their quiet mastery of rock and roll.

Just this summer, he made a long-overdue return to the UK, headlining a one-off concert in London’s Hyde Park, where he was joined on stage by Stevie Nicks, who branded Petty “my favourite rock star”.

The show was intended a celebration of The Heartbreakers’ 40th anniversary, but now serves as the band’s UK swan song.

Toward the end, Petty shared affectionate stories of the band he’d toured with for four decades.

“I’ve probably spent more time with these guys than I have with my family,” he said.

But this quiet, unassuming rock legend wouldn’t have had it any other way – whether not success came calling.

“Do something you really like, and hopefully it pays the rent,” he once told Esquire. “As far as I’m concerned, that’s success.”