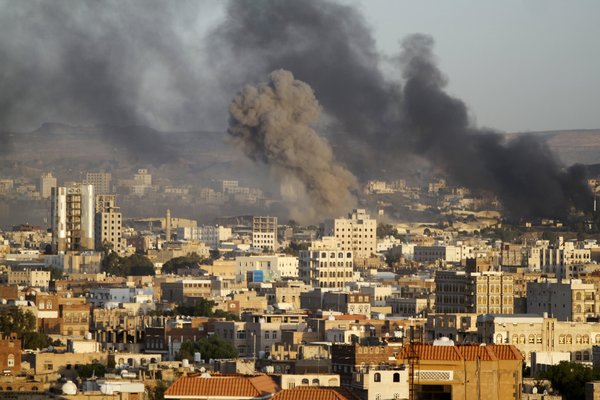 UNITED NATIONS — Saudi Arabia and its allies are pushing back on a renewed effort to establish a United Nations-backed independent international panel to investigate human rights abuses in Yemen.

A draft resolution, proposed by a small bloc of Western countries, seeks to create a commission of inquiry, similar to one for the conflict in Syria, to document the atrocities in a three-year-old conflict that pits a Saudi-led military coalition against insurgents led by the Houthis of northern Yemen. The United Nations high commissioner for human rights, Zeid Ra’ad al-Hussein, has called for exactly such an independent investigation. So have Yemeni and international human rights groups.

Saudi Arabia and its allies have objected, proposing instead that the United Nations send experts to help Yemen’s own human rights commission.

A vote is expected this week at the United Nations Human Rights Council in Geneva. Saudi Arabia and its Western backers, including Britain and the United States, all belong to the 47-member body.

The Yemen conflict, which began in 2014, has killed thousands, devastated the water and public health systems, left 700,000 people infected with cholera and seven million at risk of famine.

Human rights groups have documented a trail of international law violations on both sides of the conflict. The United Nations has repeatedly complained of a lack of access in the country, including for the delivery of lifesaving aid.

The latest United Nations human rights report, released in early September, found that Saudi-led coalition airstrikes continued to be the “leading cause” of civilian deaths, including child deaths.

The draft resolution, seen by The New York Times, encourages the Yemen national human rights body to cooperate with the United Nations human rights office and seeks to establish a three-member commission of inquiry. That panel, according to the draft, would “carry out comprehensive investigations into all alleged violations and abuses of human rights and violations of international law by all parties to the conflict in Yemen since September 2014.”

It is sponsored by Belgium, Canada, Ireland, Luxembourg, and the Netherlands.

He said the United Nations should instead help Yemen’s national authorities carry out their own investigations. Saudi Arabia had circulated its own resolution proposing that approach and said it hoped “a reasonable outcome” would be reached.

Asked if the Saudis would retaliate economically against those countries pushing a commission of inquiry, the Saudi ambassador offered a nuanced response.

“We don’t link these issues with commercial considerations,” Mr. Mouallimi said, “but I think all the countries recognize we have presented a reasonable proposal and that trying to take alternative action would not be considered a friendly gesture.”

Ravina Shamdasani, a spokeswoman for The Office of the High Commissioner for Human Rights, said in an email that Yemen’s national commission lacked access to Houthi-controlled areas and “cannot do its work impartially,” noting that it received funds from Saudi Arabia.