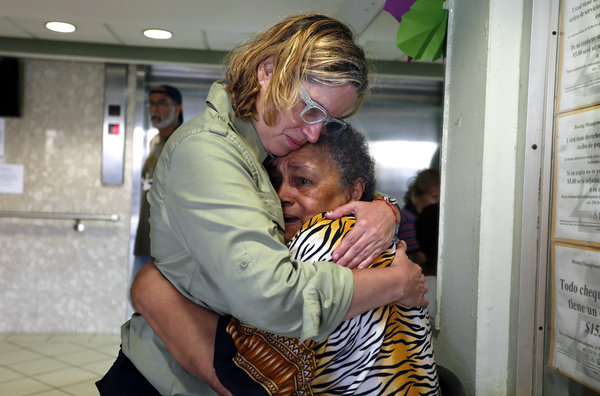 A White House official’s praise of the government response to Hurricane Maria drew a sharp rebuke from the mayor of San Juan, as Puerto Ricans grew desperate in the aftermath of the storm, struggling to obtain basic life-sustaining supplies.

Elaine Duke, the acting head of Homeland Security, said on Thursday that she was “very satisfied” with the government’s response so far and the progress that has been made.

“I know it is really a good news story in terms of our ability to reach people and the limited number of deaths that have taken place in such a devastating hurricane,” she said.

But the idea that there was anything good about the news didn’t sit well with Carmen Yulín Cruz, the mayor of San Juan. (Ms. Cruz is a member of the Popular Democratic Party, which advocates maintaining the island’s commonwealth status.)

After CNN played Ms. Duke’s comments for the mayor, Ms. Cruz called them “an irresponsible statement.”

I would ask her to come down here and visit the towns and then make a statement like that, which frankly, it is an irresponsible statement. And it contrasts with the statements of support that I have been getting since yesterday when I got that call from the White House.

Ms. Duke, who was visiting Puerto Rico on Friday, said that it was “nice to see the communities together trying to recover and support each other.”

“It was good news that the people of Puerto Rico, the many public servants of the United States and the government of Puerto Rico were working together,” she said.

The Trump administration has vowed to give the island its full support. On Thursday, it appointed a three-star general to coordinate with agencies, and it waived the Jones Act, which was seen as a hindrance to relief efforts. But residents remained in dire straits on Friday, with fuel, clean water, ice and other basic supplies running short. The entire island of 3.4 million people remained without electricity, with little phone service. At least 16 people have died, though some experts say that number is likely to grow.

In remarks to the National Association of Manufacturers in Washington on Friday, President Trump said his administration was “engaged fully in the disaster and the response and recovery effort.”

“Ultimately the government of Puerto Rico will have to work with us to determine how this massive rebuilding effort — it will end up being one of the biggest ever — will be funded and organized, and what we will do with the tremendous amount of existing debt already on the island,” he added. “We will not rest, however, until the people of Puerto Rico are safe.”