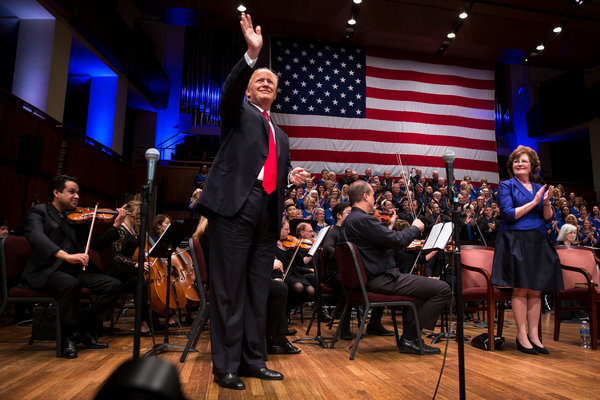 WASHINGTON — President Trump began his holiday weekend getaway with another denunciation of the news media, using a celebration of American veterans and freedom at an evening rally to thunder that he would not allow the “fake” media to stop his agenda.

Speaking to raucous supporters at a faith rally at the John F. Kennedy Center for the Performing Arts in Washington, Mr. Trump brought the crowd to its feet by condemning news organizations.

“The fake media is trying to silence us,” Mr. Trump told the crowd at the concert hall, after returning to Washington briefly from his weekend getaway at his golf club in New Jersey. “But we will not let them. Because the people know the truth. The fake media tried to stop us from going to the White House. But I’m president and they’re not.”

Mr. Trump praised American veterans and promised to defend religious liberty in America. Earlier in the day, the president also posted on Twitterabout the fake media and accused secretaries of state from around the country of trying to hide something from a panel investigating widespread voter fraud that experts say never happened.

In a Twitter message on Saturday morning, Mr. Trump said that “numerous states are refusing to give information to the very distinguished VOTER FRAUD PANEL. What are they trying to hide?”

Mr. Trump set up the Presidential Advisory Commission on Voter Integrity to find evidence for his debunked claim that millions of votes were cast illegally in the 2016 presidential election. On Wednesday, the group sent a letter to all 50 secretaries of state asking for personal data about the nation’s 200 million voters.

The response from many of the state voting officials was a resounding “no.” In Mississippi, the secretary of state, Delbert Hosemann, a Republican, said: “My reply would be: They can go jump in the Gulf of Mexico.”

Mr. Trump’s tweet suggests that he is not happy with those responses, but it is unclear what he can do about them. The commission chairman told news organizations on Friday that it was up to each state to decide what information to share with the panel.

The president started his Saturday tweet storm on a positive note, offering a “Happy Canada Day” to the people of that country and to his “new found friend” Justin Trudeau, the prime minister.

But his tone quickly turned negative.

He continued his attack on Joe Scarborough and Mika Brzezinski, the hosts of MSNBC’s “Morning Joe,” two days after saying on Twitter that Ms. Brzezinski had been “bleeding badly from a face-lift” during a social event last year.

On Saturday, he added: “Crazy Joe Scarborough and dumb as a rock Mika are not bad people, but their low rated show is dominated by their NBC bosses. Too bad!”

Taking note of MSNBC’s decision to end the new show hosted by Greta Van Susteren, the former Fox News anchor, Mr. Trump asserted that she “was let go by her out of control bosses at @NBC & @Comcast because she refused to go along w/ ‘Trump hate!’”

In fact, Ms. Susteren’s show, “For the Record,” had struggled with very low ratings since she arrived at the network about six months ago.

The president wrote: “I am extremely pleased to see that @CNN has finally been exposed as #FakeNews and garbage journalism. It’s about time!”

The president may have been referring to the latest hidden camera video produced by James O’Keefe, the right-wing activist. The video appears to show a producer for CNN’s “New Day” program calling Mr. Trump “a clown” and “crazy,” among other things. The producer also appears to say American voters are “stupid.”

Mr. O’Keefe’s previous videos have been found to be selectively edited and designed to disparage his subjects.

Mr. Trump and his family are spending several days at his Trump National Golf Club in Bedminster, N.J. He returned to Washington briefly on Saturday night to deliver remarks at the “Celebrate Freedom” rally on behalf of veterans at the Kennedy Center.

At the concert hall, Mr. Trump stood in front of a large American flag and soaked up the adoration of a crowd of largely evangelical supporters who roared their approval of his promise to defend religious liberty, fight entrenched interests, win battles against terrorists and say “Merry Christmas” again.

“Above all else, we know this: In America, we don’t worship government. We worship God,” Mr. Trump said, bringing the crowd to its feet again.

Mr. Trump told the story of an 89-year-old soldier who fought in the Battle of the Bulge in World War II and was at the event. And he introduced a soldier who had been hurt in his fifth deployment overseas.

“Your legacy, like our gratitude, will live forever,” he said.